While I was born in New York City, I didn’t grow up there. My father accepted an overseas assignment in Panama and thus began my family’s travel adventures in Trinidad, the Philippines, Canada, Colombia, and Mexico City. 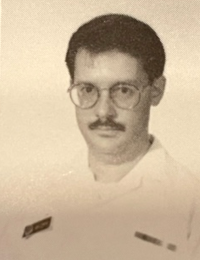 Personally, I also had the honour to serve my country as a Hospital Corpsman in the US Navy working with student Naval Aviators and other flight personnel, and as a reservist.  During the Persian Gulf War, I was called to active duty and served aboard the USNS Mercy, T-AH 19, a hospital ship that included a Canadian Armed Forces contingent.

As my mother was from a small town in Ontario called Mono Township, after legislation passed in April 2009 allowing the child of a parent and/or parents born in Canada to become a Canadian citizen, I officially became a Canadian in 2010.

I joined after becoming a Canadian citizen to continue to serve alongside my Canadian comrades.