Note this item which has been posted to the Downhome website. 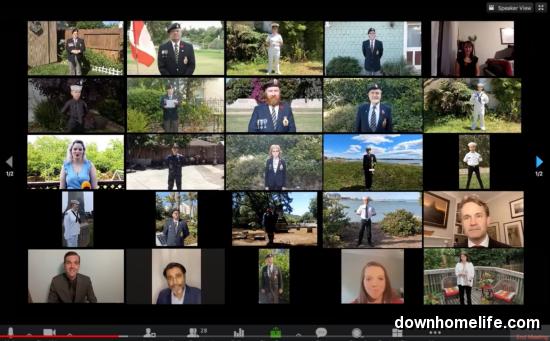 As November is the month that we traditionally turn our attention to the act of remembrance, I wanted to share a story of how I was able to bring a bit of Newfoundland tradition to the Canadian community in California. Four years ago when I relocated to the San Francisco Bay Area I was pleasantly surprised to discover that it was one of fourteen areas in the United States that has a branch of the Royal Canadian Legion. As an Associate Member of the Legion for 18 years at that point, I quickly transferred my membership to US Branch #25 and began attending meetings. It wasn’t long before I had the opportunity to take a leadership role in the branch (and later at the International Western Zone USA level), and being a proud Newfoundlander I wanted to bring a piece of my home province to the veterans community throughout California.

As the branch had been doing outreach with other Canadian and Commonwealth organizations in the area, I saw opportunities for the Royal Canadian Legion to get involved. On behalf of the branch, I became the Poppy Chair and facilitated the distributed of thousands of poppies to Canadian ex-pat organizations and Canadian owned businesses throughout Northern California. I also began representing the branch at the annual ANZAC Day service in April that was organized by various Australian and New Zealand groups in San Francisco. In 2018 I was even given the opportunity to speak about the involvement of the Royal Newfoundland Regiment in Gallipoli (as 25 April was chosen as ANZAC Day honour the members of the Australian and New Zealand Army Corps who served in the Gallipoli Campaign).

Then came the pandemic… And everything stopped, including all of the activities of Royal Canadian Legion US Branch #25! Now the Legion has been active in the San Francisco Bay Area community for more than 80 years. While the branch is a relatively small these days, with only about 40 members and no physical location, it continues to strive to be active in veterans and remembrance activities. When the closure began in March our members watched as the annual inspection of a local division of Sea Cadets that they had been sponsoring for the past 25 years was cancelled. Then March became April, and then May, and the annual ANZAC Day events and our US Memorial Day service were both cancelled. By June, the branch had cancelled is third monthly membership meetings and planning to commemorate for the 75th anniversary of the signing of the United Nations charter, which occurred in San Francisco, was postponed indefinitely.

In late May or early June a Canadian ex-pat organization called the Digital Moose Lounge contacted me to see if the branch wanted to participate in the virtual Canada Day celebration that they were planning. As a native Newfoundlander, I saw an opportunity to bring a bit of Newfoundland culture to the Canadian community in the Bay Area and throughout California. As readers of the Downhome are aware, in addition to being Canada Day, July 1 is also Memorial or Commemoration Day in Newfoundland and Labrador – a day when we remember the tragic events of the Battle of Beaumont Hamel. To honour that tradition, and as a way to begin to engage both the members of our the branch and our local cadets again, I sought to create a virtual sunrise service for Memorial Day.

Over the next few weeks I reached out to friends and family to find Newfoundland and Labrador performers – many of whom were living outside of the province – to record themselves singing national anthems, playing the Last Post and other traditional remembrance pieces, and providing components of the service. The response was amazing, and even included the local Canadian Consul General in San Francisco and Newfoundland’s representative in the federal cabinet (who was also the former Minister of Veterans Affairs). Additionally, members of both US Branch #25 and all of the branches of the International Western Zone USA, as well as our local U.S. Naval Sea Cadet Corps-Arkansas Division sent in videos. The Legion Magazine even gave us permission to use their “Military Moments: Battle of Beaumont-Hamel,” which is narrated by Newfoundlander Gordon Pinsent, as a part of the service.

At 6am local time on Canada Day, US Branch #25 of the Royal Canadian Legion hosted almost 50 attendees in a virtual sunrise service. The service was repeated at 10am for another 25 people who were unable to brave the early hour of the initial viewing. The service is still available online at https://royalcanadianlegionus25.com/2020/07/01/commemoration-day-virtual-service/ for anyone to watch. As a former social studies teacher at Discovery Collegiate in Bonavista, it was just my way of educating my fellow ex-pats about a bit of Newfoundland and Labrador history.