A notice for an up-coming event from the Digital Moose Lounge and the Canadian Consulate here in San Francisco.

On behalf of the Consul General of Canada in Northern California & Hawaii, Rana Sarkar, I am very pleased to invite you to our upcoming Community Q&A Session hosted in partnership with the Digital Moose Lounge.

We are very excited that representatives from AirCanada will be joining the conversation to present information about the current state of air travel and what to expect onboard. We will also once again be joined by Shauna Chevalier from Canada Border Services Agency, who will be able to field any inquiries related to border crossing.

If you would to attend, please send me an e-mail to RSVP. Zoom information can be found in the flier attached.

I’m writing on behalf of Consul General Rana Sarkar to invite you to an exciting virtual event.

Next Thursday, October 15th at 10AM PDT, join us as we welcome Fortune 500 Boardmember and Author Shellye Archambeau for an important online discussion about corporate culture in Silicon Valley and across the border, the importance of inclusive leadership environments, and strategies to break down barriers to entry & encourage inclusive innovation landscapes. This event comes in the wake of the publication of Ms. Archambeau’s latest book: “Unapologetically Ambitious: Take Risks, Break Barriers, and Create Success on Your Own Terms.”

You can register for the webinar for free here. We look forward to seeing you there!

All of the best, 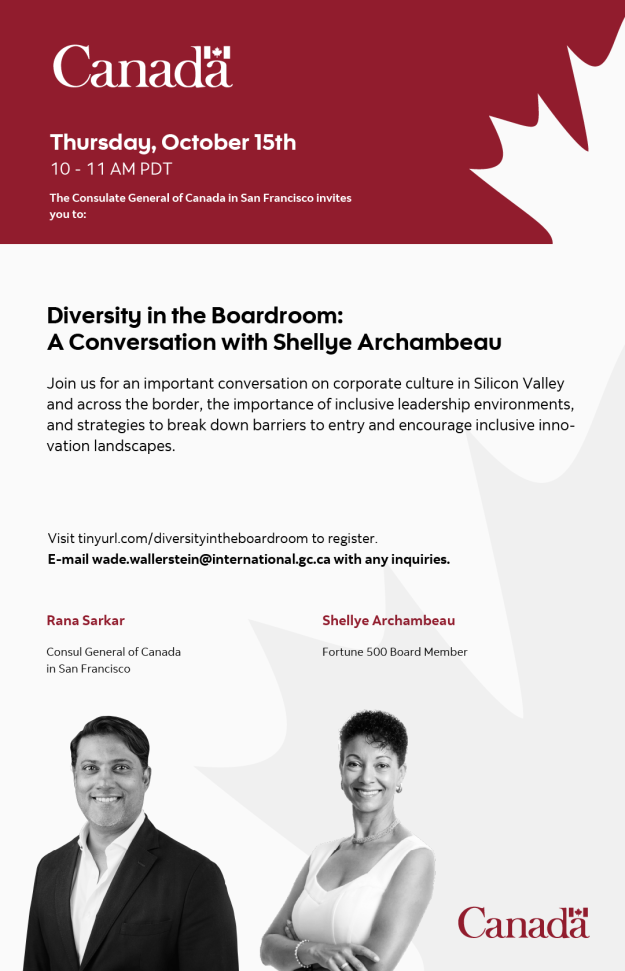 Earlier today representatives from US Branch #25 presented the Mr. Rana Sarkar, Consul General for Canada in San Francisco,  with the Royal Canadian Legion Certificate of Merit and a challenge coin.  On hand for the presentation was branch President, Fred Rutledge, and Vice-President, Michael Barbour; along with several members of the Consulate staff.

In addition to the presentation to the Consul General, US Branch #25 also presented challenge coins to all members of the staff at the Canadian Consulate in San Francisco.

To view the motion that was passed by US Branch #25 with respect to these presentations by clicking here.  Below are some pictures from the presentation. 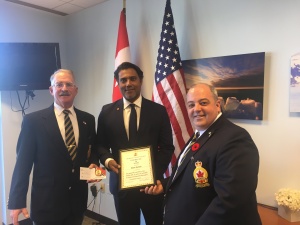 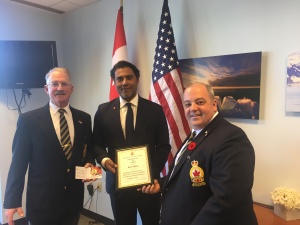 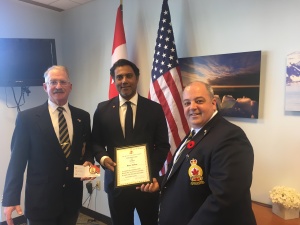 From the Consulate General of Canada in San Francisco…

Today marks the first official day of the 2019 poppy campaign.  For folks in the Bay Area, the Canadian Consulate in San Francisco has poppies available.  They are located at:

Be sure to stop by and pick up your poppy.

A reminder of this up-coming event with the Canadian Consul General.

Opportunities for economic development with California’s second leading trading partner will be the focus when Rana Sarkar, consul general of Canada, is hosted at the annual international trade luncheon by the Hayward Chamber of Commerce on Feb. 27.

The event is co-sponsored by the California State University, East Bay, College of Business and Economics.

The luncheon will be held from 11:30 a.m. to 1 p.m. at the Golden Peacock Banquet Hall and Conference Center, 24989 Santa Clara St., Hayward. Reservations must be made in advance at the chamber website www.hayward.org. Tickets are $25 apiece and will not be sold at the door.

“We are honored to be co-sponsors of this event and look forward to welcoming to Hayward a representative of California’s second largest trading partner and a historic ally,” said George Low, dean of the College of Business and Economics at Cal State East Bay.  “Students, faculty, and staff from the College of Business and Economics as well as the public will have the opportunity to learn more about current issues in international trade by attending this event.”

“Hayward is a perfect place for the consul general to discuss the bright future for trade between our countries,” said Kim Huggett, president and CEO of the Hayward Chamber of Commerce. “Here at the center of the Bay Area a growing number of Hayward companies are keeping our chamber busy issuing certificates of origin for their exports.”

Mr. Sarkar was appointed consul general of Canada in San Francisco / Silicon Valley in 2017. He previously served as national director for high growth markets at KPMG Canada and co-chairman of the advisory board at the Munk School of Global Affairs at the University of Toronto. From 2009 to 2013 he was president and chief executive officer of the Canada-India Business Council.

He co-founded Content Partners, a global content agency, and in 2001 the advisory firm Rawlings Atlantic Limited. He began his career as a consultant at Roland Berger Strategy Consultants in London and Munich and helped establish the company in India. He attended the London School of Economics, Queens University at Kingston, Ontario, and the INSEAD Executive Program in France.

Canada’s Impact on California and the Bay Area

According to the California Chamber of Commerce, Canada has remained California’s second largest export market (after Mexico) since 2006, with a total value of over $16.7 billion in 2017 (9.7 percent of all California exports), as well as exporting $9.2 billion in services to Canada. California imports $28.7 billion from Canada.

According to the Canadian government, nearly $2 billion worth of goods and services crosses the Canada-U.S. border daily, the equivalent of over $1 million traded every minute.

Factoids from the California Chamber of Commerce:

According to the Canadian Trade Commissioner Service, U.S. goods and services trade with Canada totaled an estimated $673.9 billion in 2017.

Event co-sponsors with the Hayward Chamber of Commerce include the Consulate General of Canada; the City of Hayward; the California State University, East Bay, College of Business and Economics; the US Commercial Service, Mijosa LLC, PG&E, and the Russell City Energy Center.