In the lead up to our 90th anniversary on August 12, 2021 we have been exploring ways to provide some form of commemoration of this milestone for our membership.  Other branches have undertaken everything from t-shirts and jackets to ball caps to lapel pins and buttons to cookbooks to ceremonial plates and spoons – even matchbooks and ashtrays.  For example, this is a throwback lapel pin from Branch 25. 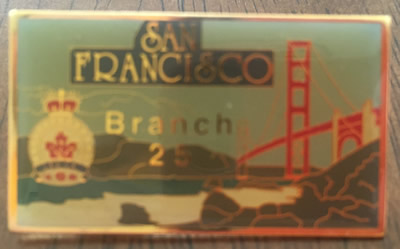 Many will recall that last year we produced a challenge coin to mark an occasion.  In 1995, Branch 25 of the Royal Canadian Legion began its affiliation with the U.S. Naval Sea Cadet Corps Arkansas Division.  In his initial proposal to the branch, Comrade Fred Rutledge wrote that the relationship between the two organizations was natural, as it was quite common for Legion branches in Canada to sponsor a local cadet corps.  At the time, then Commanding Officer Lt. Lee Smith wrote that this affiliation would assist the cadets in participating to the fullest in the many training opportunities available to them.  To commemorate that anniversary, Branch #25 sponsored a competition to design a challenge coin that reflected this 25th anniversary, as well as both Branch 25 of the Royal Canadian Legion and the U.S. Naval Sea Cadet Corps Arkansas Division.

Branch 25 is currently sponsoring a competition for the design of a 90th anniversary challenge coin. To providing you with some inspiration, below are example of existing Royal Canadian Legion challenge coins. 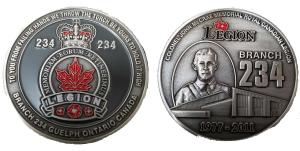 Over the years, there have been branches of the Royal Canadian Legion in Oakland, Sacramento, Alameda, Redwood City, Petaluma, Berkeley, Hayward, Santa Cruz, Contra Costa, San Mateo, and San Francisco.  Today, only the branch in San Francisco remains.  However, as branches ceased to exist the San Francisco branch assumed responsibility for their members and commitments – including maintaining and honouring the plots with Canadian and British veterans at Liberty Cemetery in Petaluma and Greenlawn Cemetery in Colma.

So submit your design of a 90th anniversary challenge coin to commemorate the occasion and recognize our history to mkbarbour-at-gmail.com