Yesterday we posted the weekly newsletter from the World War One Centennial Commission.  As a part of that newsletter, there was an article that focused on our branch that we have included below. 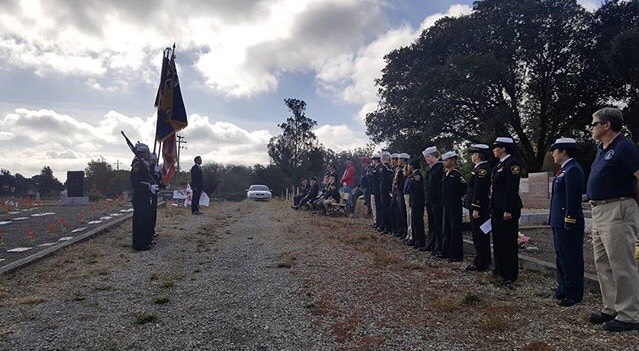 Royal Canadian Legion U.S. Branch 25 holds its annual Remembrance Day service in 2017 in Liberty Cemetery (located in Petaluma). Liberty Cemetery is one of two cemeteries where Canadian and British service men and women are buried, and the Branch helps to maintain both locations.

“Commemorating those who served, remembering the service of those who have passed on”

The ties between the U.S. and Canada were never stronger than during World War I. Not only did our nations help each other with wartime food and supplies — but over 35,000 Americans served in the Canadian Expeditionary Force from 1914-1918. Some 3,500 of those men and women lost their loves in the war. We were thrilled recently to learn that a very special group of Canadians follow our Centennial Commission’s activities. The Royal Canadian Legion is a non-profit veterans service organization that supports Veterans and their families, remembers the men and women who served our country, and strengthens communities. The Legion has a chapter based in the San Francisco Bay area, U.S. Branch 25, who have been very active in Great War remembrance activities — they share our weekly Dispatch stories with their members, and they even participated in our Bells of Peace on Nov 11th, 2018. We had a chance to talk to U.S. Branch 25 member Michael Barbour about the Post, about the members, and about his own connection to World War I.

We were thrilled to see that you share our DISPATCH with your Post members! How did you find us? 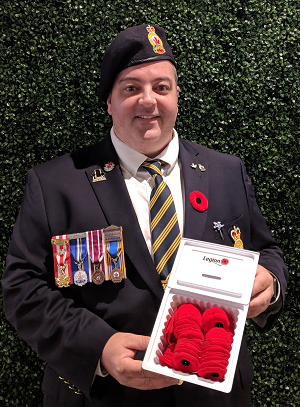 Michael Barbour visiting visit C100, a Canadian organization in the Bay Area, to deliver poppies and a poppy box as a part of the Poppy Campaign (an annual activity of all branches of the Royal Canadian Legion).I’ll be honest and say that I’m not sure. You guys started showing up in my inbox at some point, and since it was appropriate to our membership I decided to share it on the blog portion of our website.

Tell us about your Legion Post. Who are the members? What is the history? Is there a connection to WWI? How many Royal Legion Posts are there in the US, overall?

Our branch is actually the combination of four or five former branches. As you might imagine, the Bay Area was an attractive location for many Canadians upon retirement. Plus a lot of former role Canadian Air Force members found their way to California as pilots, given the fact that San Francisco was a hub for several airlines. As our membership has aged and passed away, those multiple branches have dwindled into a single branch for the entire Bay Area.

Our branch is actually the combination of four or five former branches. As you might imagine, the bay area was an attractive location for many Canadians upon retirement. Plus a lot of former role Canadian Air Force members found their way to California as pilots, given the fact that San Francisco was a hub for several airlines. As our membership has aged and passed away, those multiple branches have dwindled into a single branch for the entire Bay Area. While this would be well before my time, but we have had branches in the Bay Area for at least four or five decades now – maybe longer.

The San Francisco branch of the Royal Canadian Legion, or US Branch 25, is one of 11 or 12 North American branches that are outside of Canada. All but one of these are in the United States, with one in Chapala, Mexico. Our branch, along with the four others in California, and the one in Mexico, form the US Western Zone. The other US based branches form the US Eastern Zone, and then there are 6 to 8 branches in Europe that are part of the European Zone.

Our members are a combination of ex-pat Canadians, ex-pat British (who joined our branch prior to the creation of the San Francisco branch of the Royal British Legion), and several Americans who have some connection to Canada. Well most of our members are in the San Francisco Bay Area, we do have members that reside in Texas, Nevada, Idaho, Montana, and even one in Switzerland (the last one is a former CA resident who just maintained her membership).

As for our connection to World War I, as a veterans organization, we focus our activities on commemorating those who served and remembering the service of those who have passed on.

For example, during our Remembrance Day service this past November 11, we participated in the Bells for Peace initiative. We also help to organize the Festival of Remembrance that’s held at Grace Cathedral on the Sunday closest to Remembrance Day each year.

Tell us about yourself. What was your service? Do you have a personal connection to WWI?

I was not in the service myself. The Royal Canadian Legion has three types of membership. The first is a regular member and those are the people that have served. The second is an associate member, and those are the spouses, children, and grandchildren of those who served. There are also affiliate members, which are those individuals that support the mission of the Royal Canadian Legion but have no direct connection to military service.

Myself, I am an associate member because my grandfather served during World War Two.

My own personal connection to WWI would be a family one:  The Barbour Living Heritage Village, in Newtown, Newfoundland, is a restored heritage property of the Barbours, a prominent merchant family in the coastal Province of Newfoundland and Labrador. Exhibits include information and letters from Lester Barbour, who served in the Canadian Expeditionary Force during World War I, and who was killed in action on March 10th, 1918 at Paschendale.
http://rnfldrmuseum.ca/private-lester-barbour-3907-died-of-wounds-100-years-ago/
http://www.barbour-site.com/lesters-letters/
http://collections.mun.ca/cdm/landingpage/collection/barbour
http://www.barbour-site.com/lesters-last-letter/

How have you been marking the war’s centenary? Have there been local events, activities?

Well as I mentioned above, this past year we helped to organize the Festival of Remembrance which for the first time featured the German consul general, along with the British and Canadian consul generals, in a symbol of coming together. Also, as noted above we participated in the Bells for Peace initiative.

What types of stories would you like to see more of in our weekly DISPATCH?

Well, as a Canadian organization, more Canadian content would be great! 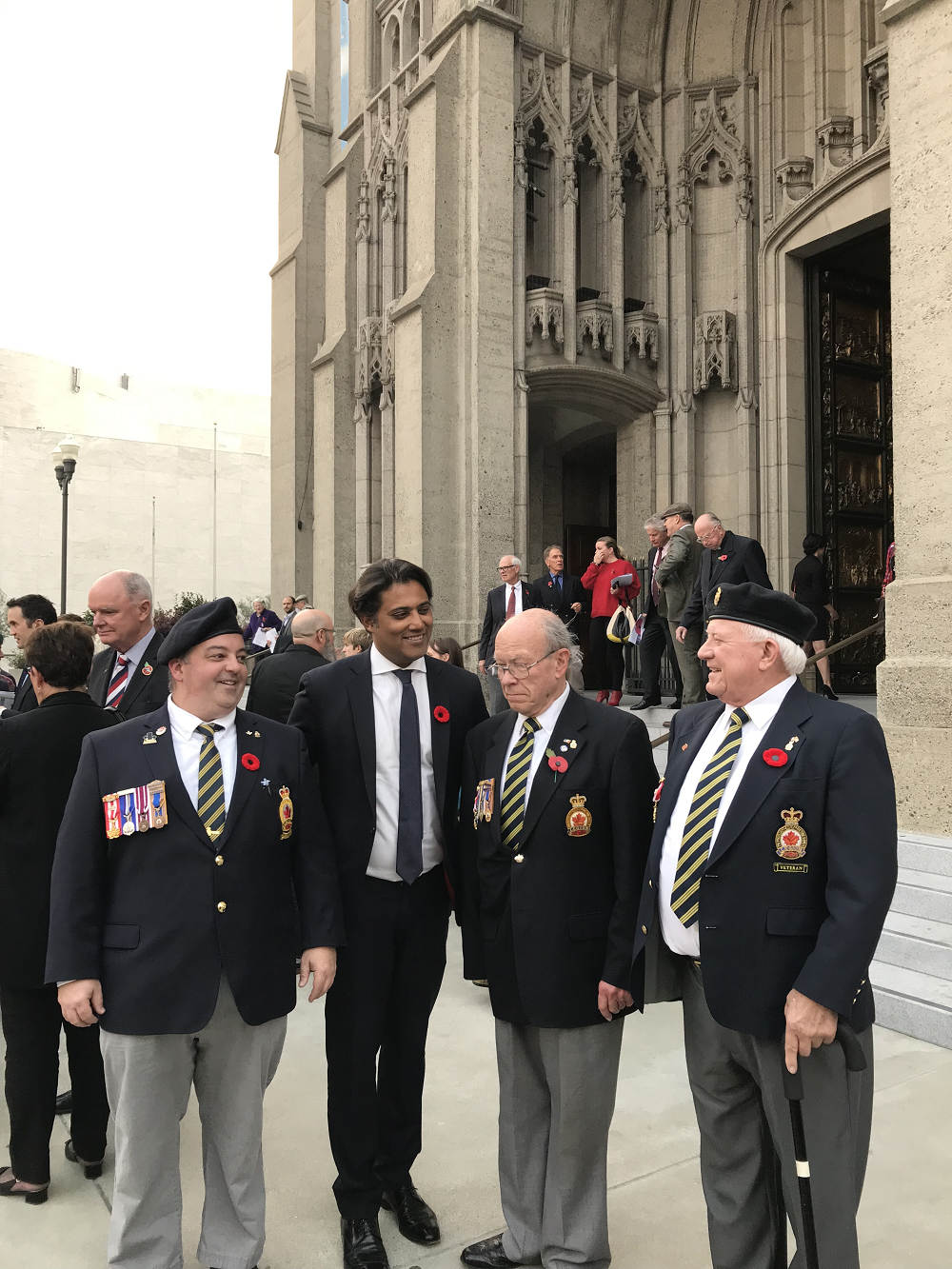 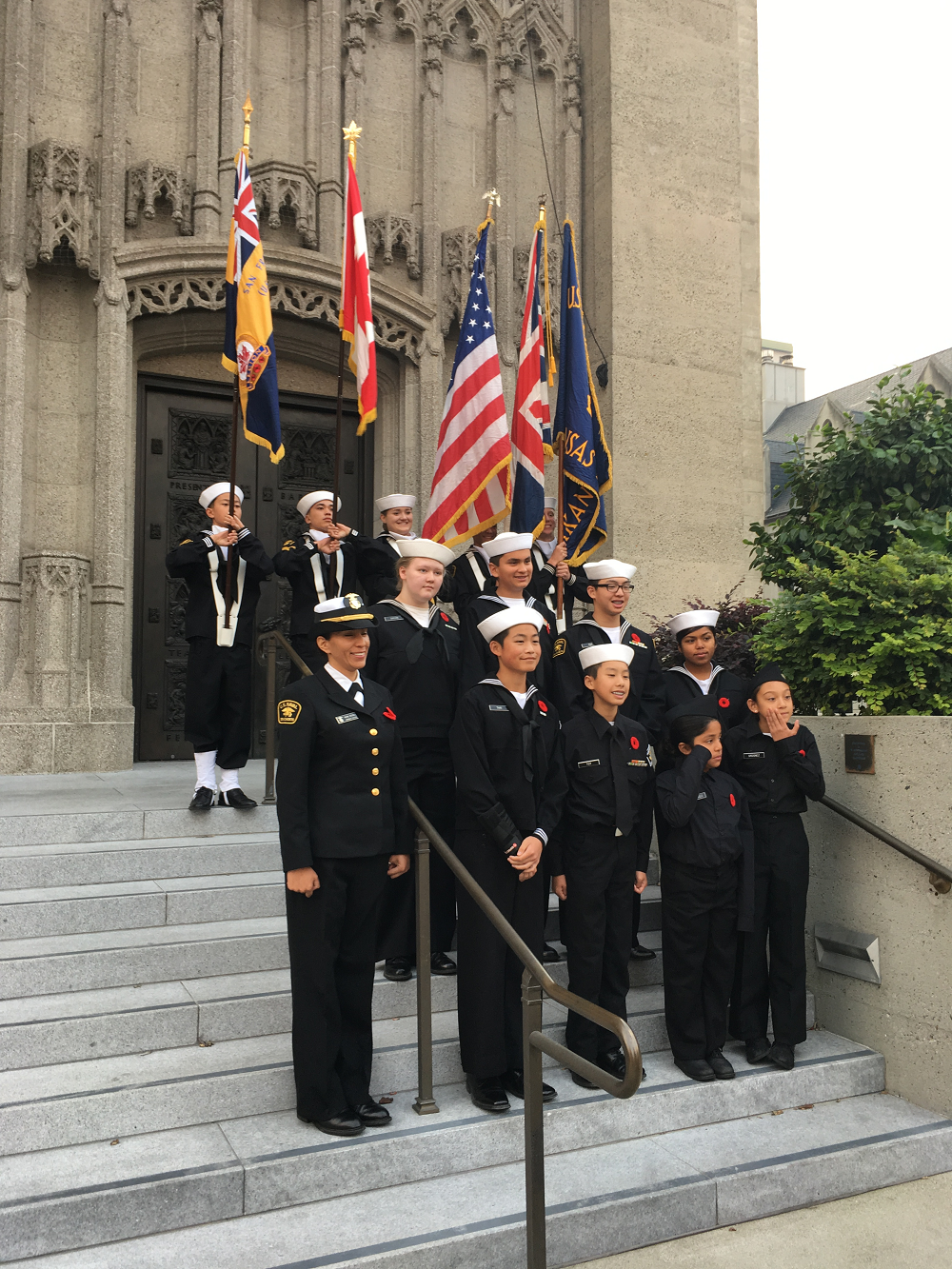 The U.S. Naval Sea Cadet Corps (USNSCC) Arkansas Division outside of Grace Cathedral following the 2018 Festival of Remembrance. Like many Canadian-based branches of the Royal Canadian Legion, we have sponsored a division of local cadets for almost 25 years now. 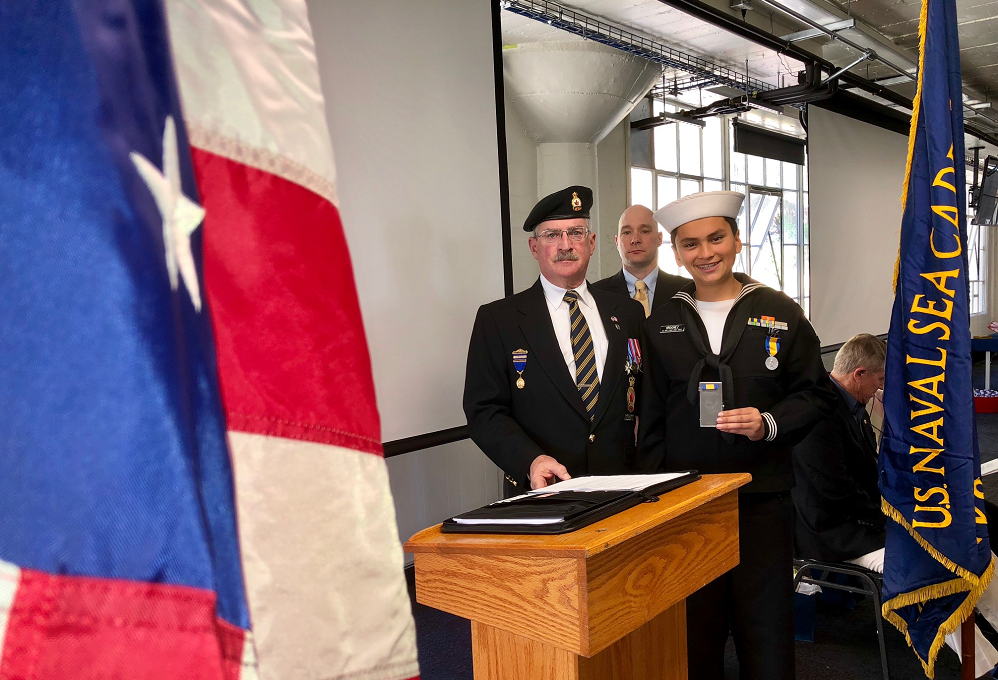