A holiday item from the RCAF Association.

The Holiday Season is almost upon us; and, on-line shopping is expected to be busy, during the COVID-19 pandemic, this time ’round. Looking for Christmas Gifts from the Air Force Kitshop? Check out our Christmas Specials here, at this website today. Thank you for supporting the RCAF Association!

Another virtual Remembrance Day service that folks may be interested in.

All members of the RCAF Association, but especially those in time zone “UTC-7 or Mountain Standard Time (MST)” in which Calgary is located, are invited to join on-line a virtual Remembrance Day commemoration with special guest Commodore M.T.J. Josée Kurtz, Commander Cadets and Junior Canadian Rangers. The website to explore on 11 November 2020 at 10:45 AM (MST) is https://783afacwingcalgary.ca/ and you can learn more at the RCAF Association website events notice found here:

We offer sincere gratitude to Dave O’Malley ( https://www.aerographics.ca/ ) for the tribute to General Carr, which you can view here, at this link.

Funeral details are still pending; more to follow at a later date, but preparations are underway for the service and inurnment to be live-streamed beginning at 11:00 am EITHER 30 October or 31 October, TBC.

If you have a story about your service with General Carr, please consider sending it to editor@airforce.ca for publishing consideration.

This virtual event may be of interest to some of our members. 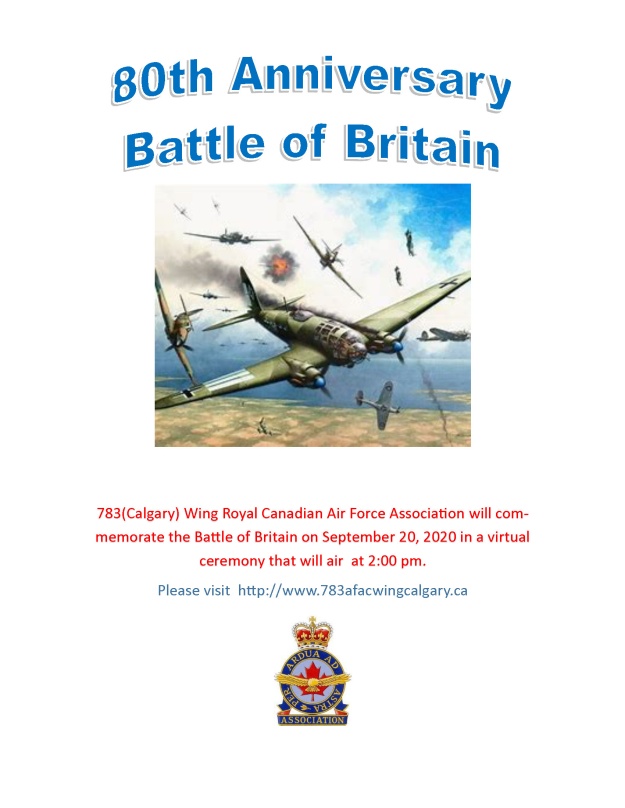 Note this event next month from the RCAF Association.

Please note this year’s Battle of Britain (national) Ottawa ceremony has been reformatted with everyone’s health and safety in mind. The RCAF Association is excited with this new format, as it will provide an opportunity for more Canadians to participate in the event “live.” The Commander of the RCAF will mark the occasion as per the information shared below:

The Battle of Britain ceremony will be held Sunday September 20, 2020 at 10:00 AM via live facebook feed, for those able to “tune” in. Thank you for helping us mark this auspicious occasion.